The End of Ice

In only the third public conversation between these two progressive icons, Ralph talks to Professor Chomsky about – among other things – the media, the Green New Deal, nuclear war, Gaza, and Venezuela. 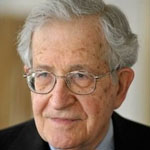 Considered the founder of modern linguistics, Noam Chomsky is one of the most cited scholars in modern history. Professor Chomsky’s theory of transformational grammar revolutionized the scientific study of language. He is also one of the most influential public intellectuals in the world, having written more than 100 books, many of which target the role of the mainstream corporate mass media, which, he maintains, “manufactures consent” in favor of the capitalist system and the political powers that support it.

“What is happening is a soft coup, a stranglehold which will lead somehow to the overthrow of the government and a return of Venezuela to the kinds of circumstances that you see in the other U.S. run countries of the region. You want to look at atrocities, crimes and so-on, simply look at the countries where the U.S. has maintained control.” Noam Chomsky